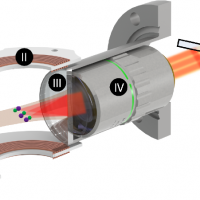 Ultracold molecules have been proposed as a rich resource for many applications ranging from precision measurements and quantum metrology to quantum simulation and quantum information processing. The benefits of molecules in all these applications arise from the many internal degrees of freedom in a molecule. For example, even with the simplest diatomic molecules, one has vibration and rotation as new degrees of freedom when compared to atoms. These in turn can give rise to new features such as strong long-range dipolar interactions between molecules, a key ingredient in many proposals of quantum simulation and quantum computing.

Image Caption: Experimental setup for loading and imaging single molecules in optical tweezers. Ultracold molecules are laser cooled and loaded into tightly focused optical tweezers created with a microscope objective. Fluorescence from the molecules is collected back through the objective and imaged onto a camera.

Image Caption: Image of an optical tweezer array of single molecules. The tweezer traps have a spacing of about 5 um and contain single molecules at temperatures of ~30uK.

These applications require control of molecules at the single particle level. One method of doing this is to load individual molecules into small, micron-scale ‘optical tweezers.’  This platform offers the possibility of high-fidelity readout and control of individual molecules. Tweezer arrays could function as quantum simulators of solid materials, and offer unprecedented microscopic access to these quantum systems.

Over the past year, we have realized such an array.  Using this tweezer platform, in combination with internal state control of the molecules, we performed state dependent collisional studies of CaF molecules. This is an important step towards understating what happens when two molecules collide.

In the future we are interested in exploring the prospects of shielding molecular collisions. Suppressing collisional loss would allow the implementation of evaporative cooling, which was the key step to realizing temperatures low enough to produce Bose-Einstein condensation in gases of atoms.  We are also working towards constructing a new tweezer apparatus which will work to demonstrate a molecular qubit gate.