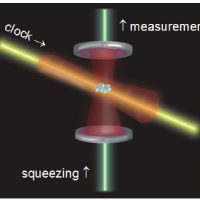 Optical lattice clocks (OLC) are widely recognized as the next golden standard for timekeeping. Over the past decades, researchers around the world have made the second the best characterized among all seven of International System of Units (SI units), reaching an unprecedented fractional stability at few parts-of-ten-Quintillion (1019). Despite the tremendous effort of improving technology in this field, the state-of-the-art performance is ultimately limited by the standard quantum limit (SQL), where probabilistic quantum projection noise dominates. This limit could be overcome by engineering quantum correlations, or entanglement, between the atoms.

An MIT team led by Prof. Vladan Vuletić recently demonstrated, for the first time, an OLC operating beyond the SQL showing, thus, the pathway to the quantum-enhanced metrology. An ultracold vapor of ytterbium-171 was prepared in a spin-squeezed state, a particular multiparticle entangled state, prior to the timekeeping operation. The quantum noise in the spin-squeezed state is redistributed along two orthogonal directions of the spin vector leading to the reduction of the uncertainty in the measured quadrature during the clock operation. The MIT researchers successfully demonstrated a clock operated with the quantum entangled state outperforms the clock with the typical classical input state.

Establishing quantum correlations within atomic ensembles requires a nonlinear interaction between the atoms. In the MIT experiment, the ytterbium atoms are placed in an optical cavity resonant with an atomic transition and the necessary interaction is mediated by the intracavity photons. In particular, the developed optical technique is beneficial for metrological applications since the interaction can be turned off after the preparation of the spin-squeezed state. Furthermore, the MIT researchers transferred the quantum entangled state from magnetic sublevels to the electronic optical transition oscillating at hundreds of terahertz by applying a mapping optical Rabi Pi pulse. More than 90% of the spin correlation is preserved after such operation and the system is then interrogated through the typical Ramsey interference with a reference laser. With such technique, state-of-art optical lattice clocks should perform 2.8(3) times faster integration than previously. Image Caption: Setup and protocol for the creation of an entangled-enhanced optical clock. a) two-dimensional optical lattice at the magic wavelength to trap Ytterbium-171 atoms. The cavity axis is used for generation of entanglement among the atoms and for readout. The interrogation with the clock laser (yellow laser beam) is performed along the x-direction. b) Relevant energy levels for spin squeezing and clock interrogation. The system is initially prepared in a coherent spin state using RF pulses (purple arrows). Atoms in the hyperfine state mF=+1/2 interact with the squeezing light (green arrow), modifying the phase relation between the two ground hyperfine state in a state-dependent way which leads generates spin squeezing. c) Transfer of the spin squeezed state from the hyperfine ground states to the clock transition. Here, Ramsey spectroscopy is performed using this entangled state. d) Spectrum generated scanning the clock laser (after two-photon Raman sideband cooling) to drive transitions among different levels of the harmonic potential of the lattice. The central peak represents the n to n transitions and the left and right peak represent the n to (n-1) and n to (n+1) transition, respectively. d) Squeezed-clock protocol. A SSS is created in the ground-state levels {|↓⟩ , |↑⟩}, transferred to the clock manifold {|g⟩ , |e⟩}, evolved in a Ramsey sequence for time τR, and mapped back onto {|↓⟩,|↑⟩}, where the state is measured. Purple and yellow Bloch spheres represents the evolution of the quantum state in the RF and optical domain, respectively.

In the near future, a more stable reference laser will be developed and implemented allowing longer interrogation time, therefore the OLC will reach better performance. The technique developed by the MIT team promises to be a milestone in the emerging field of quantum metrology, opening up to a variety of applications ranging from precise frequency standard definition, geodesy, and red-shift measurement and mapping, to fundamental studies such as dark matter search, gravitational wave detection, general relativity tests, and many others.

This work was supported by the ONR, NSF, and DARPA.