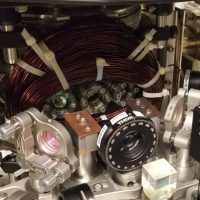 Photons, the smallest energy carriers of light, interact extremely weakly in vacuum. However, realizing strongly interacting photons at the individual photon level is fascinating, as it allows people to use light to control light. This opens the possibility to implement quantum information science, to design all-optical quantum devices, and to form novel quantum many-body states of photons.

Researchers led by Prof. Vladan Vuletic and Prof. Misha Lukin aim to make photons strongly interact with each other. Although photons do not interact with each other in vacuum, they do interact with matter such as atoms. By engineering an optical nonlinear medium, using a cold and dense cloud of Rubidium atoms, the lab can produce strongly-interacting photons by propagating them through the atomic medium.

By harnessing an optical effect known as Electromagnetically-Induced Transparency (EIT), the incoming photons can evolve into polaritons as they enter the atomic medium. Polaritons are made up of both light and atomic excitations. Due to the atomic excitations, photons start to acquire some effective mass and travel much slower than the speed of light inside the medium.

To introduce interactions between photons, the group chose the atomic excitations to be Rydberg states, which means the outside electron of Rb atoms is excited to a very high energy level such that the Van der Waals interactions between them are strong. Consequently, as the polaritons propagate inside the medium, the Rydberg-Rydberg interactions can modify their properties, which eventually manifest as effective photon-photon interactions.

However, it turns out involving only one type of polariton inside the medium is not sufficient to realize repulsive photons. To circumvent this challenge, the group came up with an idea that makes the photons transform into two different types of polaritons. With the interference between these two polaritons, repulsive photons have been observed for the first time experimentally. With the repulsion, a chain made with three equally spaced photons emerges. This self-ordered spatial structure of photons is a hint of the formation of a crystal made with photons. Image Caption: To characterize the photon-photon interactions, we measured the so-called second-order correlation functions (g2) as shown in this figure. The correlation function tells us if we detect one photon at time zero, what is the probability that we can detect a second photon at time tau. For non-interacting photons, the correlation function is a constant with its value at 1. However, in this figure, it is clear to see that the value of g2 at short temporal separation is less than 1. This is because as photons become repulsive, two photons prefer not to stay near each other. The dip near tau=0 in this figure demonstrated the observation of repulsive photons.