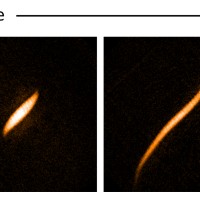 In its most famous form, the Heisenberg uncertainty relation tells us that we cannot know both the position and momentum of a particle. The best we can do is to redistribute the intrinsic quantum uncertainty, for example by making position more precise at the expense of momentum, via a procedure known as squeezing. However, the uncertainty relation is much more general; for example, for a charged particle moving in a magnetic field one cannot know both its X and Y coordinates simultaneously, meaning that quantum physics causes a strange, intrinsic ‘smearing’ of space. This plays a crucial role in the quantum Hall physics shown by electrons in a magnetic field, which display universal values for the electrical resistance, and unimpeded propagation around the sample boundary. Despite being discovered in the 1980s, many open questions remain about how such exotic properties arise.

Ultracold quantum gases offer a very versatile platform for studying this type of physics. Researchers at MIT, led by Prof. Martin Zwierlein, used a rotating gas of neutral atoms to simulate the behaviour of charged particles in a magnetic field. This similarity arises because in a rotating system, the Coriolis force makes particles travel in curved lines, just like charges in a magnetic field. By applying just the right kind of forces to the rotating gas, they could persuade particles to reduce their uncertainty in one direction, at the expense of increasing it along another. This is the first direct observation of ‘squeezing’ of quantum uncertainty in real space. In addition, by using high-resolution imaging the team could directly see the intrinsic quantum positional uncertainty set by the Heisenberg limit. Looking forward, this method allows the researchers to produce gases where the distance between atoms becomes comparable to their quantum smearing, heralding the onset of strongly-correlated physics.

Figure caption: Pictures of a Bose-Einstein condensate evolving under an artificial magnetic field, created by rotating the trap the gas is held in. By applying certain forces, the particles’ wavefunction is squeezed along one diagonal, while becoming increasingly delocalised along the other. Eventually, the strip becomes as thin as allowed by Heisenberg uncertainty.

Zwierlein’s team members include graduate students Airlia Shaffer, Cedric Wilson, Parth Patel, Zhenjie Yan, Valentin Crepel, Biswaroop Mukherjee, and postdoc Richard Fletcher, all of whom are associated with the Center for Ultracold Atoms and the Research Laboratory of Electronics at MIT.