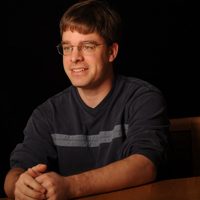 Request a change to this page
Graduate Student

Charlie Doret graduated from Williams College in 2002, double majoring in physics and mathematics. As an undergraduate he received the APS Apker Award for his thesis work measuring a Stark shift in atomic thallium under advisor Tiku Majumder. A student at Harvard since 2002, he presently works with Colin Connolly on a buffer-gas loaded Bose-condensate of metastable helium under the leadership of John Doyle
and Wolfgang Ketterle. In addition to his 4He* research, Charlie is also interested in tabletop-scale precision measurements and in teaching.