For optoelectronic applications such as LEDs and solar cells we focus on manipulating and controlling excitons—quasiparticle excitations consisting of a bound electron and hole that mediate the absorption and emission of light, especially in disordered and low-dimensional materials. 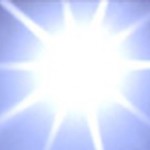 We seek to supersede traditional optoelectronics with devices that use excitons to mediate the flow of energy. Mastering the properties of excitons offers the ability to guide energy at the nanoscale, and transform it with a flexibility that is impossible in conventional systems. For example, excitons have no net charge and can be split or combined. As an example, we have exploited this flexibility by using singlet exciton fission to generate multiple carriers in a solar cell at an efficiency of > 1.26 electrons per photon, exceeding the unity limit in conventional electronic materials.

The spintronics of excitons is key to our work. Indeed, the high efficiencies of singlet exciton fission arise because competing thermalization losses are spin disallowed.

Figure: Unlike electrons, excitons can be split. In the Center for Excitonics, we have used singlet exciton fission in pentacene to generate at least 1.26 electrons per photon. From Baldo, Van Voorhis, et al. Science (2013) and APL (2013)

Photovoltaic (PV) cells remain an expensive source of electrical power. We believe that the best way to reduce the cost of PV energy is to improve efficiencies. This reduces both the cost of the solar cell per Watt generated, as well as reducing the installation cost, since fewer cells are required.

We are following two approaches to reducing the cost of PV energy.

(i) Solar antennas
Solar antennas are optical devices installed as coatings on solar cells or as separate light absorbing structures. They can be used to concentrate light or enhance efficiency. For example, we have built solar concentrators that collect light using organic dyes and concentrate it on solar cells. The architecture is known as a luminescent solar concentrator (LSC). It enables high optical concentration without excess heating in a stationary system. Perhaps the ultimate LSC is a solar powered laser. Here, sunlight is transformed into a coherent beam. This allows the maximum possible optical concentration, and can also be used for wavelength conversion. Finally, we have been investigating the use of singlet exciton fission in solar antennas. Exciton fission can occur in organic materials when the singlet exciton has almost exactly twice the energy of the triplet. We are interested in using this mechanism to improve the efficiency of inorganic solar cells in the visible spectrum.

See our work on:

(ii) Organic Solar Cells
Organic solar cells promise to be cheap sources of photovoltaic energy. They presently limited, however, by relatively low efficiencies. One notable aspect of organic cells is that their operation is much closer to photosynthesis than conventional photovoltaics. Our initial work employed biological materials extracted from plants and photosynthetic bacteria. This was perhaps the first demonstration of the integration of photosynthetic protein-molecular complexes in solid state devices. More recently, we have continued our interest in photosynthesis by imitating the multistep charge dissociation pathway. This led to a focus on the charge transfer states that mediate both exciton dissociation and charge recombination. Our other focus in organic photovoltaics is spin engineering. We are following the example of organic LEDs, where control over exciton spin led to large increases in efficiency. In principle, control over spin offers three benefits: much longer exciton diffusion lengths for triplet (spin 1) excitons, the ability to turn off recombination by engineering triplet CT states, and exploiting singlet exciton fission to increase photocurrents. See our work on:

Organic light emitting devices (OLEDs) are a highly promising emissive technology for flat panel displays. OLEDs employ soft organic semiconductors to convert injected charge into luminescent excitons, in a process known as electroluminescence. But in order to be widely adopted, OLEDs must not only match the color purity and long-term stability of competing technologies, they must realize their maximum potential efficiency.

We have focused on the efficiency of electroluminescence, and particularly the effects of spin on exciton formation in organic semiconductors. We have measured the fundamental efficiency limits in OLEDs and demonstrated a new method for improving performance that we term ‘extrafluorescence’.

We have demonstrated a new method for obtaining high efficiency blue OLEDs and developed a novel technique for analyzing the optical properties of OLEDs.

We have also developed a novel method for patterning thin films of organic semiconductors.

See our work on: Thin film optical coatings that modify reflection and transmission characteristics of lenses, solar cells, art glass and other optical components are projected to reach $10.2B/yr in sales by 2016 [BCC Research]. However, like many optical systems, the design of thin film optical interference coatings remains more art than science. The algorithms employed to develop optical coatings are heuristic and they cannot guarantee that their results are optimal. We have developed the first algorithm that can guarantee a global solution to an optical thin-film multilayer system design problem, by drawing on the branch-and-bound algorithmic framework. We are fine-tuning our software and algorithms to make them more feasible computationally and thereby more practical for wide scale adoption.
To demonstrate our capabilities, we have designed and fabricated an efficient (near-perfect) broadband omnidirectional antireflection coating for planar silicon solar cells. Several other design problems, spanning across the optical, electronic, and magnetic domains, are under investigation.

For logic, we focus on building systems using spintronics to overcome perhaps the greatest weakness of conventional field-effect transistor logic—its power dissipation. Although the switching energy of transistors has continued to decrease as conventional devices scale to smaller sizes, the supply voltage cannot scale correspondingly and more energy is lost to charge leakage. We propose instead to manipulate information in collective states such as the domains of ferromagnets. Strong interactions in ferromagnetic domains align electron spins collectively. We have been working to translate these phenomena into practical, concatenable digital logic circuits. We focus on building digital logic with spintronics as a solution to overcome one of the greatest weaknesses that has emerged in conventional field-effect transistor logic—their power dissipation. We argue that to be robust against noise, all switches should exhibit an energy difference between their ON and OFF states. For example, the potential energy difference between the ON and OFF states of a conventional field effect transistor is ΔE = ½CV2, which can also be expressed as ΔE = ½QV, where Q is the total charge on the gate capacitor, C, and V is the supply voltage. The fundamental limit in the OFF state current is the probability of thermal excitation from the OFF state to the ON state. That is:

where ION is the maximum current associated with the ON state. But devices do not operate at this limit because each electron in the channel is independent. The actual ON-OFF ratio is determined by:

where q is the charge of a single electron. Thus, in order to achieve a given ratio of IOFF/ION the operating voltage of modern devices is increased beyond theoretical limits by a factor of approximately Q/q. At present transistor dimensions Q >> 103 q, leading to substantial increases in the voltage and dynamic power.

Our solution to this problem is to look for systems where information is stored in a collective phenomenon. For example, instead of using a transistor where every conducting charge is independent, we are interested in states such as the domains of ferromagnets. Strong interactions in these systems, align electron spins collectively. We have been working to translate these phenomena into practical, concatenable digital logic circuits.

In addition to our designs of computing systems with magnetic logic, we also investigate material effects that affect the operation of the magnetic logic device.

For further reading about our device, check out our publication: Currivan et al, IEEE Magnetics Letters 2012.