Written and submitted by Bo Zhen

Enhancing and manipulating the light emission of organic molecules is at heart of many important technological and scientific advances, including in the fields of organic light emitting devices, bio-imaging, bio-molecular detection. Researchers at MIT have now discovered a new platform that enables dramatic manipulation of the emission of organic molecules when simply suspended on top of a carefully designed planar slab with a periodic array of holes: so-called photonic crystal surface.

Influenced by the fast and directional emission channels (called ‘resonances’) provided by the photonic crystal surface, molecules in the solution that are suspended on top of the surface no longer behave in their usual fashion: instead of sending light isotropically into all directions, they rather send light into specific directions.

The researchers say that this platform could also be applied to enhance other type of interactions of light with matter, such as Raman scattering. Furthermore, this process applies to any other nano-emitters as well, such as quantum dots. 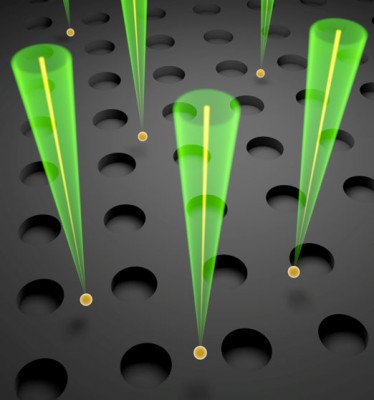 PHOTO CAPTION: Pictured is a representation of organic molecules (shown as yellow spheres) suspended on a photonic crystal slab (shown as a grey substrate) supporting macroscopic resonances. Bo Zhen et al. found that when molecules are brought to within 100 nm from the slab surface, they no longer send out light isotropically in all directions, but instead send light of the same wavelengths into specific directions, as depicted by the light cones. This dramatic modified emission compared to the molecules’ emission without the crystal slab’s presence could have important implications for organic light emitting devices and molecular sensing. Image courtesy of Yan Liang (l2xy2.com) and Bo Zhen.

“Most fluorescing molecules are like faint light bulbs uniformly emitting light into all directions,” says Soljačić. Researchers have often sought to enhance this emission by incorporating organic emitters into sub-wavelength structured cavities that are usually made out of inorganic materials. However, the challenge lies in an inherent incompatibility in the fabrication of cavities for such hybrid systems.

Zhen et al present a simple and direct methodology to incorporate the organic emitters into their structures. By introducing a microfluidic channel on top of the photonic crystal surface, organic molecules in solution are delivered to the active region where interaction with light is enhanced. Each molecule then absorbs and emits significantly more energy with an emission pattern that can be designed to be highly directional. “Now we can turn molecules from being simple light bulbs to powerful flashlights that are thousands of times stronger and can all be aligned towards the same direction,” says Shapira, the senior author of the paper.

This discovery lends itself to a number of practical applications. “During normal blood tests, for example,” adds Shapira, “cells and proteins are labeled with antibodies and fluorescing molecules that allow their recognition and detection. Their detection limit could be significantly improved using such a system due to the enhanced directional emission from the molecules.”

The researchers also demonstrated that the directional emission can be turned into organic lasers with low input powers. “This lasing demonstration truly highlights the novelty of this system,” says the first author Zhen. For almost any lasing system to work there is a barrier on the input power level, named the lasing threshold, below which lasing will not happen. Naturally, the lower the threshold, the less power it takes to turn on this laser. Exploring the enhancement mechanisms present in the current platform, lasing was observed with a substantially lower barrier than before: the measured threshold in this new system is at least an order of magnitude lower than any previously reported results using the same molecules.