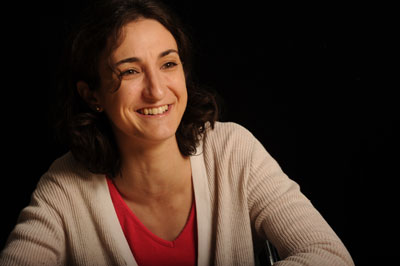 Academic history prior to coming to MIT:
Completed two years at the University of São Paulo, in Brazil as an Electrical Engineering major before transferring to the Ecole Polytechnique in France. She spent the last year of her bachelor level studies at the University of Cambridge, Trinity College, where she obtained a MPhil for work with quantum dots and photonic structures.

What brought you to MIT?
I applied to do my Ph.D. with Prof. David Cory at the Nuclear Science and Engineering Department at MIT after attending his presentation during a Quantum Control Workshop at Harvard University.

What problem are you trying to solve with your current research and what are some possible applications?
Two years into my PhD program, Prof. Cory announced the moving of his lab to the University of Waterloo, in Canada. His former student, Prof. Cappellaro, was going to start a research group at MIT the following Fall; in becoming her first and senior student, I saw an opportunity, and challenge, to gain experience building a lab from scratch.

The goal of the experiment that we built is to control, at room-temperature, the spin qubit of a Nitrogen-Vacancy center in diamond in order to implement quantum computing and metrology protocols. Many groups in RLE are pursuing similar endeavors with other qubit systems, such as photons and trapped ions.

Our first project consisted of investigating a particular qubit driving sequence for magnetometry purposes. The Nitrogen-Vacancy center spin qubit can be used as a very sensitive quantum magnetometer as its resonance changes in the presence of an external magnetic field. The problem is then mapped into finding the most appropriate qubit driving sequence which highlights the detuning, caused by the field, from the true qubit resonance. By using a continuous-drive sequence known from early nuclear magnetic resonance studies called “rotary echo” and subsequently reading out the state of the magnetometer, we were able to sense the magnetic field imprinted on the Nitrogen-Vacancy center by a single proximal nuclear spin.

What interests you most about your research?
Quantum mechanics is such a wonderful branch of Physics, and I was very fortunate to realize it early when a professor introduced me to the Feynman Lectures. I take a particular interest in trying to understand how quantum mechanical systems can be put to work in order to improve real-life applications.

What are your future plans?
I plan to remain in the university setting; teaching and mentoring are my passions.