From Sound to Sense: 50+ Years of Discoveries in Speech Communication

Event to honor Kenneth N. Stevens and survey progress in the field 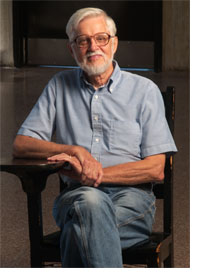 The Research Laboratory of Electronics (RLE) at the Massachusetts Institute of Technology (MIT) is pleased to announce that it will co-sponsor, “From Sound to Sense: 50+ Years of Discoveries in Speech Communication,” a conference that will be held on the MIT campus June 11–13, 2004.

The objective of the conference is to provide a single venue in which a broad spectrum of scientists and engineers can gather to review significant research progress in speech communication scientific and engineering research from the past fifty years, assess the current state of the art, and promote cross-fertilization among the sub-disciplines in this very wide-ranging field to benefit future work. The scientific program will include invited oral sessions and contributed poster sessions.

The event coincides with the fiftieth anniversary of Professor Kenneth N. Steven’s presence on the MIT faculty and in RLE. Professor Stevens has made pioneering contributions to the theory, mathematical methods and analysis of acoustics in speech production, leading to the contemporary foundations of speech science. His theoretical work on acoustic properties of speech sounds that comprise the linguistic elements of language form the major principles of speech science. His theoretical work on acoustic invariance has defined unifying principles that have integrated major portions of acoustic phonetics, phonology, speech science and linguistics. Professor Stevens has mentored generations of researchers in speech communication.

Co-sponsors of the conference include RLE, the Computer Science and Artificial Intelligence Laboratory (CSAIL), the Harvard-MIT Division of Health Sciences and Technology (HST), and the Department of Electrical Engineering and Computer Science (EECS). In addition many individuals have generously provided support.

From Sound to Sense: 50+ Years of Discoveries in Speech Communication