Irreversible Thermodynamic Bound for the Efficiency of Light-Emitting Diodes 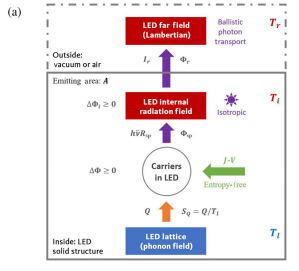 A thermodynamic model for light-emitting diodes (LEDs) is developed by considering energy and entropy flows in the system. Thermodynamic constraints have previously been considered separately for the reversible process of electroluminescence in LEDs and for light extraction and collimation in other optical systems. By considering both processes in the LED model, an irreversible upper bound for the conversion of electrical energy to optical energy is derived and shown to be higher than unity, but tighter and more realistic than the reversible case. We also model a LED as an endoreversible heat engine where the carrier-transport processes can be directly connected to the elements of a thermodynamic cycle.