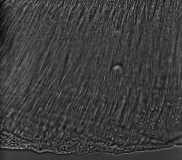 A new mechanism that could help explain the remarkable sensitivity and exquisite frequency selectivity of our sense of hearing has been discovered by Dennis Freeman, Professor of Electrical Engineering and Research Laboratory of Electronics (RLE) Principal Investigator in the Micromechanics Group, in collaboration with Dr. Roozbeh Ghaffari, post-doctoral associate in the RLE. Their new findings, described in the February 25th early edition of the Proceedings of the National Academy of Sciences USA, demonstrate that the tectorial membrane, an extracellular matrix found in the inner ear, not only plays a mechanical role in stimulating sensory hair cells but is also electrically excitable. This finding suggests a positive feedback relation whereby the tectorial membrane excites sensory cells, which in turn stimulate the tectorial membrane to further drive the same sensory cells.

Hearing
MIT Research Laboratory of Electronics (RLE) researchers have discovered a new hearing mechanism that may underlie the remarkable sensitivity and frequency selectivity of human hearing. The new mechanism, described in the early edition issue of the Proceedings of the National Academy of Sciences USA, for the week of February 25th, is driven by electro-mechanical interactions of the tectorial membrane with sensory receptors in the inner ear.

Our sense of hearing is remarkably sensitive. This sensitivity is thought to be driven by electromotility of a special class of sensory receptors known as outer hair cells, which amplify sounds as they propagate through the inner ear. The new findings reported in this study, however, show that electromotility is not only a property of the sensory receptors, but is also a property of the overlying tectorial membrane. The finding is of significance as it indicated the presence of an additional mechanism of positive feedback, whereby the tectorial membrane excites sensory cells, which in turn stimulate the tectorial membrane to further drive the same sensory cells. 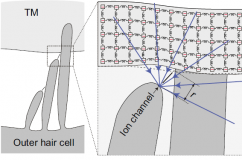 The tectorial membrane is a very challenging target for experimentation. The fragile structure, 97% water in composition, is smaller than the diameter of a single human hair and vibrates less than a nanometer in response to low level sounds. The electromotile response of the tectorial membrane was quantified using a stroboscopic computer vision imaging system and Doppler optical coherence microscopy, both of which are sensitive to nanometer displacements at audio frequencies.

The researchers plan to investigate the possibility that this new mechanism underlies genetic disorders of hearing, which are known to result from mutations of the tectorial membrane.

Dennis Freeman is a Professor in MIT’s Department of Electrical Engineering and Computer Science (EECS), and is the Principal Investigator in the Micromechanics Group. Scott Page and Shirin Farrahi are graduate students in EECS, and Jonathan Sellon is a graduate student in the Harvard-MIT Division of Health Sciences and Technology.

This research was funded by the National Institutes of Health.

Proceedings of the National Academy of Sciences USA