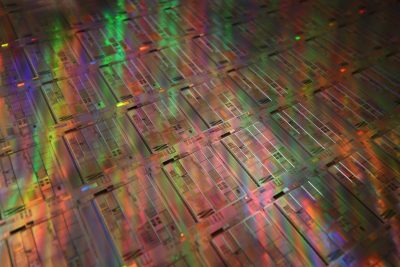 Published in their Nature Photonics manuscript, the Photonics Microsystems Group of the Research Laboratory of Electronics has successfully demonstrated a novel method to generate second-order nonlinear optical effects in silicon waveguides, which are nonexistent due to the crystalline symmetry of silicon. This new effect is achieved by breaking the symmetry of the silicon crystal by locally generating an intense directional electric field inside an electrical diode implanted into a silicon waveguide. These devices are fabricated in a CMOS foundry on 300mm silicon-on-insulator wafers and are mass-producible in the same fashion as microprocessors, memory, and solid-state drives. The high-resolution lithography (fabrication) employed in the foundry gives the ability to control and manipulate light roughly 200 times less the width of a human hair allowing for fabrication of structures on the nanometer scale.

Specifically, in this work, two devices are shown utilizing this second-order nonlinear effect. First, a high-speed, low-loss, and chirp-free optical phase shifter is demonstrated. A device such as this can help to realize radio frequency and microwave links with complex modulation formats without the need for signal normalization, boosting data rates at data centers and in high-performance computers. Second, frequency doubling of an input infrared laser in a silicon waveguide using only the local electric field is shown.

A second-order nonlinear optical effect is needed for fundamental processes such as second harmonic generation, phase-only modulation, and optical parametric oscillators. Prior demonstrations of second-order nonlinear optical effects in CMOS compatible platforms were weak and not suitable for efficient frequency doubling. On the contrary, demonstrations with III‑V materials were strong but not suitable for wafer-scale CMOS fabrication. Our devices combined the CMOS compatibility with a strong nonlinearity in an integrated silicon photonic platform developed by MIT over the past decade. This breakthrough gives rise to a new class of mass-producible silicon photonic devices such as tunable laser sources in infrared to mid-infrared spectrum, ultra-stable on-chip optical clocks, terahertz generators, optical parametric oscillators, and chirp-free modulators.