"Big RLE was never a starchy place...[it included] a wide spectrum of scholars far from electronics but vital to the human activity of communication." 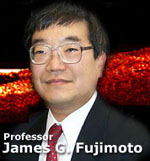 Professor James G. Fujimoto of the Research Laboratory of Electronics (RLE) and the Department of Electrical Engineering and Computer Science at the Massachusetts Institute of Technology (MIT) has been named one of the 2002 recipients of the prestigious Rank Prize for Opto-electronics.

Professor Fujimoto, a principal investigator in RLE’s Optics and Quantum Electronics Group, is being recognized for his outstanding contributions to the science and application of opto-electronics, particularly for the invention and applications of optical coherence tomography (OCT). Professor Fujimoto shares his prize with his colleagues Professor Carmen A. Puliafito, M.D. and Mr. Eric A. Swanson.

OCT is a fundamentally new optical imaging modality invented and developed by Professor Fujimoto’s research team at RLE in collaboration with his colleagues in the medical community. OCT enables high-resolution high-speed, cross-sectional tomographic imaging that has been applied successfully to medical diagnostics, materials science, and microscopy.

In medical diagnostics, OCT has been widely applied in ophthalmology, where its ability to perform high resolution cross sectional imaging of retinal pathology promises to improve the diagnosis and management of ophthalmic diseases. In internal medicine, OCT enables the visualization of tissue microstructure and pathology in living organisms. In combination with small fiber-optic catheters, endoscopes, and other imaging devices, OCT can be applied to many clinical applications ranging from cardiovascular imaging to surgical guidance. Professor Jeffrey H. Shapiro, Director of RLE and Julius A. Stratton Professor of Electrical Engineering, had these comments upon learning of Professor Fujimoto’s sharing the 2002 Rank Prize for Opto-electronics.  “Professor Fujimoto’s opto-electronics research has long been distinguished for its excellence in both science and technology. It is especially gratifying that he be honored for his work on optical coherence tomography, because of the growing impact that OCT is having within the clinical community. OCT represents a perfect example of the benefits that accrue when innovative technology is applied to medicine.”

Professor Sir William Stewart presented the Rank Prize for Opto-electronics to Professor Fujimoto and his colleagues at a special ceremony at the Royal Society of Medicine, London, United Kingdom on 25 February 2002.

The Rank Prize Funds were established in accordance with Lord Rank’s wishes just prior to his death in 1972. The primary objective of the Funds is to recognize and foster significant advances in the areas of science which were of particular interest to Lord Rank. There are two Funds, one of which concentrates on opto-electronics. The Rank Prize Funds are headquartered in Surrey in the United Kingdom.

The Research Laboratory of Electronics is one of MIT’s premier research units. Founded in 1946 as successor to MIT’s famous wartime Radiation Laboratory, RLE has grown to become one of the Institute’s largest and most diverse centers of scientific and educational activity, with interests spanning a broad interpretation of electronics.

The Massachusetts Institute of Technology is a coeducational, privately endowed research university. It is dedicated to advancing knowledge and educating students in science, technology, and other areas of scholarship that will best serve the nation and the world in the 21st century.