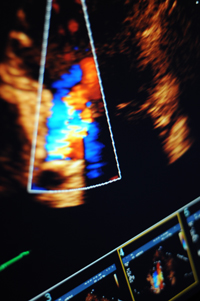 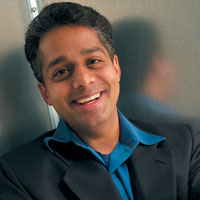 Professor Rahul Sarpeshkar of the Research Laboratory of Electronics and the Department of Electrical Engineering and Computer Science has been named a recipient of the prestigious Office of Naval Research (ONR) Young Investigator Award.  The objectives of the ONR Young Investigator Program (YIP) are to attract to naval research outstanding new faculty members at institutions of higher education, to support their research, and to encourage their teaching and research careers.  Professor Sarpeshkar is one of only 26 winners of this career development award this year nationwide.

Professor Sarpeshkar’s program, “Bio-Inspired VLSI Sensory Processing: Silicon Cochleas, Motion Sensors, and Hybrid Computers,” will investigate processing spike outputs from the auditory and optic nerves in a spike-based hybrid computer that operates in a fashion that is neither purely analog nor digital.  An important building block in such computers is a hybrid state machine (HSM), that allows powerful computational primitives for pattern recognition, learning, sequence recognition, analog-to-digital conversion, reconfigurable processing, and intelligent decision making to be implemented in hardware.  Professor Sarpeshkar’s group will develop a novel interface between sensory nerve inputs and the hybrid computer that will extract information from every spike through simple sample-and-hold synaptic circuits.

Professor Sarpeshkar’s research group in RLE focuses on low-power analog Very Large Scale Integrated (VLSI) systems.  Their current emphasis is on building bionic systems for the deaf and blind, and biologically-inspired sensor and mixed signal computing systems.  Professor Sarpeshkar’s work on the silicon cochlea was inspired by the biophysics of the human cochlea and is now regarded as the state of the art in the field.  It is being investigated for use in bionic implants for the deaf, both in his laboratory and by researchers worldwide.  Professor Sarpeshkar has also pioneered the field of spike-based analog-digital computing, assembling numerous patents in this area.  His work on visual motion sensors resulted in the widest dynamic range analog VLSI velocity sensor to date.

ONR sponsors science and technology support of the U.S. Navy and Marine Corps. Founded in 1946, ONR today funds work at more than 450 universities, laboratories, and other organizations.   From oceanography, advanced materials, sensors, and robotics to biomedical science and technology; from electronics, surveillance, and neurotechnology to manufacturing technology and information science; from advanced combat systems to other technologies for ships, submarines, aircraft, and ground vehicles.

The Research Laboratory of Electronics is one of MIT’s premier research units. Founded in 1946 as successor to MIT’s famous wartime Radiation Laboratory, RLE has grown to become one of the Institute’s largest and most diverse centers of scientific and educational activity, with interests spanning a broad interpretation of electronics.

The Massachusetts Institute of Technology is a coeducational, privately endowed research university. It is dedicated to advancing knowledge and educating students in science, technology, and other areas of scholarship that will best serve the nation and the world in the 21st century.