"What we have today was thought to be impossible yesterday." 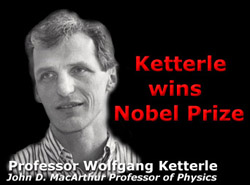 The Royal Swedish Academy of Sciences has named Professor Wolfgang Ketterle of the Research Laboratory of Electronics (RLE) one of the three recipients of the 2001 Nobel Prize in Physics for the achievement of Bose-Einstein condensation in dilute gases of alkali atoms, and for early fundamental studies of the properties of the condensates.  In addition to being a member of RLE, Professor Ketterle is an investigator in the MIT-Harvard Center for Ultracold Atoms (CUA).

Professor Ketterle’s co-recipients are Dr. Eric A. Cornell of JILA and the National Institute of Standards and Technology and Dr. Carl E. Wieman of JILA and the University of Colorado at Boulder.

The text of the official Nobel Prize press release follows:

New State of Matter Revealed: Bose-Einstein Condensate
A laser beam differs from the light from an ordinary light bulb in several ways. In the laser the light particles all have the same energy and oscillate together. To cause matter also to behave in this controlled way has long been a challenge for researchers. This year’s Nobel Laureates have succeeded ­ they have caused atoms to “sing in unison” ­ thus discovering a new state of matter, the Bose-Einstein condensate (BEC).

In 1924 the Indian physicist Bose made important theoretical calculations regarding light particles. He sent his results to Einstein who extended the theory to a certain type of atom. Einstein predicted that if a gas of such atoms were cooled to a very low temperature all the atoms would suddenly gather in the lowest possible energy state. The process is similar to when drops of liquid form from a gas, hence the term condensation.

Seventy years were to pass before this year’s Nobel Laureates, in 1995, succeeded in achieving this extreme state of matter. Cornell and Wieman then produced a pure condensate of about 2 000 rubidium atoms at 20 nK (nanokelvin), i.e. 0.000 000 02 degrees above absolute zero.

Independently of the work of Cornell and Wieman, Ketterle performed corresponding experiments with sodium atoms. The condensates he managed to produce contained more atoms and could therefore be used to investigate the phenomenon further. Using two separate BECs which were allowed to expand into one another, he obtained very clear interference patterns, i.e. the type of pattern that forms on the surface of water when two stones are thrown in at the same time. This experiment showed that the condensate contained entirely co-ordinated atoms. Ketterle also produced a stream of small “BEC drops” which fell under the force of gravity. This can be considered as a primitive “laser beam” using matter instead of light.

It is interesting to speculate on areas for the application of BEC. The new “control” of matter which this technology involves is going to bring revolutionary applications in such fields as precision measurement and nanotechnology.

The MIT Department of Physics