"...these dinners [in RLE] were a seminal experience which both introduced us to a new world of ideas and new friends, many of whom became collaborators in later years. [Norbert] Wiener's theme that it was the organization of symbols, not their physical embodiment, bonded us together whatever our disciplinary origins." 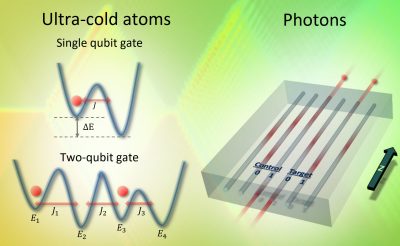 Quantum Walks are unitary processes describing the evolution of an initially localized wavefunction on a lattice potential. The complexity of the dynamics increases significantly when several indistinguishable quantum walkers propagate on the same lattice simultaneously, as these develop non-trivial spatial correlations that depend on the particle’s quantum statistics, mutual interactions, initial positions, and the lattice potential. We show that even in the simplest case of a quantum walk on a one dimensional graph, these correlations can be shaped to yield a complete set of compact quantum logic operations. We provide detailed recipes for implementing quantum logic on one-dimensional quantum walks in two general cases. For non-interacting bosons—such as photons in waveguide lattices—we find high-fidelity probabilistic quantum gates that could be integrated into linear optics quantum computation schemes. For interacting quantum-walkers on a one-dimensional lattice—a situation that has recently been demonstrated using ultra-cold atoms—we find deterministic logic operations that are universal for quantum information processing. The suggested implementation requires minimal resources and a level of control that is within reach using recently demonstrated techniques. Further work is required to address error-correction.