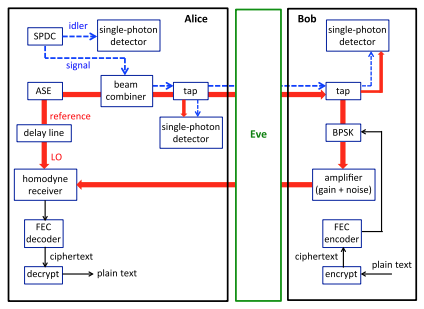 Conventional cryptography—such as the Rivest–Shamir–Adleman public-key infrastructure—may be rendered insecure by the ever-increasing capabilities of classical computers and the emergence of quantum computers. Quantum key distribution and post-quantum cryptography are presently being pursued as solutions to the quantum threat, but they offer no protection against an adversary who has obtained decryption keys by hacking the computer where they are stored, or by bribing a code clerk who has access to them. This paper introduces a protocol, which we call quantum low probability of intercept (QLPI), that has the potential to solve the key-disclosure problem. It transmits a ciphertext in such a way that laws of physics prevent an eavesdropper’s obtaining anything but an error-ridden version of that ciphertext from an individual attack or a restricted class of collective attacks. Consequently, even were an adversary to possess the decryption key, the plain text could not be recovered from such attacks. Furthermore, QLPI is capable of gigabits per second communication rates on optical fiber over metropolitan-area distances without space-division or wavelength-division multiplexing and without the need for any new technology.