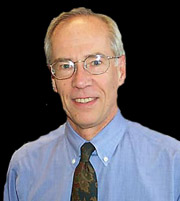 It was announced on Wednesday, 16 May 2001 at the monthly meeting of the MIT faculty that Professor Erich P. Ippen of RLE has been named the 2001–2002 recipient of the James R. Killian, Jr. Faculty Achievement Award.  The Killian Award is the highest honor bestowed by the MIT faculty on one of its own members. It was established in 1971 as a tribute to the late Dr. Killian, MIT’s 10th president and former chairman of the Corporation, and “…to recognize extraordinary professional accomplishments by full-time members of the MIT faculty.”  Its recipient traditionally delivers a lecture in the spring term of the award year.The Killian award citation praised Professor Ippen for having, “…established the field of femtosecond optics with Dr. Charles Shank, now at UC Berkeley, while both were working at Bell Laboratories.

“They pioneered the generation of ultrafast laser pulses and their use in ultrafast spectroscopy. Since this initial technological breakthrough of the production of subpicosecond optical pulses, Professor Ippen and his MIT research group have pushed the pulses to be of sufficiently short duration to capture the motion of particles in the atomic and subatomic regime.

“Many of the phenomena discovered by Professor Ippen constitute the fundamental bases of today’s technologies. His pioneering success in mode-locking a semiconductor laser is of particular importance to optical communications and to making ultrafast techniques universally accessible to the scientific community.” Professor Ippen joins the ranks of two other RLE faculty who have been recipients of the prestigious Killian Award: RLE’s Associate Director, Professor Daniel Kleppner, who was the recipient for 1995–1996, and Institute Professor Hermann A. Haus, who was the recipient in 1982–1983.