"...our alumni company founders voice a great fondness for both the MIT and RLE cultures... They have clearly carried that spirit with them when they left RLE and went on to build new enterprises in the same style that they had so much enjoyed here in RLE."

The shadow of amplified atoms. The RLE group analyzed their atom amplifier by letting the atoms ballistically expand for 30 ms and then taking an absorption image. The two pictures compare results without (left) and with (right) amplification. The spot marked BEC is the shadow of the Bose-Einstein condensate which acted as the amplifier. The spot labeled “input” shows the input atoms which are amplified to a larger and darker spot marked as “output”. The field of view of the pictures is 2.1 mm wide.

Like a cartoon character who gets zapped by lightning and turns into a multitude of clones, atoms passing through a device developed by Massachusetts Institute of Technology researchers are “amplified” into a beam of many more atoms.

A team of researchers affiliated with MIT’s Research Laboratory of Electronics and led by Wolfgang Ketterle, John D. MacArthur Professor of Physics, report in the December 9 issue of Nature that they have created a device that increases the number of particles in a beam of atoms.

What’s more, the atoms that come out of the device are in precisely the same quantum mechanical wave formation as the ones that went in, providing a rare glimpse of quantum mechanics at work on a macroscopic scale.

The device may lead to major improvements in precise sensors for gravity and rotation used in navigation and geological exploration.

Since Ketterle’s research team developed the atom laser in 1997, people have questioned whether atoms can be amplified the way light passing through an optical laser is amplified. The MIT researchers recently stumbled on a way to do just that.

Working with ultracold atoms whose movements are slowed to crawl, the MIT research group sent a weak beam of sodium atoms through a device they created. A beam 30 times stronger emerged. The device transfers atoms from a reservoir to the input wave, like a stream feeding a river to increase its flow. This transfer of atoms was accomplished by scattering laser light. The recoil of the scattering process accelerated some atoms to exactly match the velocity of the input atoms.

Not only were the atoms amplified, “what came out was exactly in lockstep with what we put in. They were in same motional state, they had the same quantum-mechanical phase,” Ketterle said. “The output atomic beam is coherent with respect to the input beam,” proving that the device is a matter-wave amplifier that preserves the quantum-mechanical wave properties of the atoms.

David E. Pritchard, professor of physics, a pioneer in atom optics and atom interferometry and co-leader of the MIT group, said, “I thought that we would develop atom optics for 20 years or so before making an amplifier. Yet here we have demonstrated a simple configuration that takes atom optics from passive devices such as diffraction gratings and mirrors into active devices that actually amplify.”

“I am amazed at how simply we could realize a phase-coherent atom amplifier,” Ketterle added. “We created a cloud of ultracold atoms in the form of a Bose-Einstein condensate and illuminated it with a light pulse. That’s all it took.” 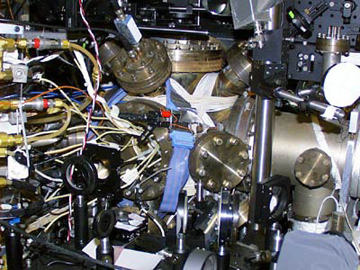 Experimental setup for amplifying atoms. Shown is the ultrahigh-vacuum chamber at RLE surrounded with optics and magnets necessary to produces ultracold atoms and to amplify them.

Explaining BEC
The atom amplifier requires a reservoir, or an active medium, of ultracold atoms that have a very narrow spread of velocities and can be transferred to the atomic beam.

A natural choice for the reservoir was a Bose-Einstein condensate (BEC), a new form of matter first observed in a gas by researchers at the University of Colorado at Boulder in 1995 and shortly afterward by Ketterle’s group at MIT. BECs form when atoms are cooled to around one-millionth of a degree Kelvin, or more than a million times colder than interstellar space.

At such low temperatures, the atomic matter waves overlap and the atoms lose their individual identities. “They essentially march in lockstep as a single giant matter wave displaying uniform behavior. In contrast, atoms in an ordinary gas flit around independently,” said MIT graduate student Shin Inouye.

Bose-Einstein condensation has now been achieved by 21 groups in the United States, Germany, France, New Zealand, England, Japan, Italy and the Netherlands, accelerating the pace of developments in the field. In the past four years, more than 1,000 research papers on BEC have been published.

The atom laser
Like an optical laser that creates concentrated beams of light, atom lasers are intense sources of coherent atoms, or atoms that are marching in lockstep. Three years ago, the first atom laser was realized by Ketterle and his research team. The researchers were able to extract a laser-like atom beam from the BEC and show that it is coherent; i.e., that its atoms act together as one giant wave, a defining feature of a laser.

The atom laser was based on some form of amplification. However, because there was no input beam, the evidence for amplification was only indirect. 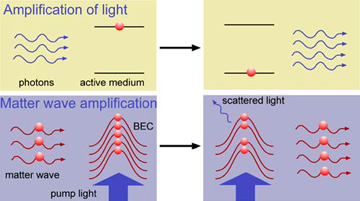 A baffling phenomenon
A direct observation of atom amplification was preceded by a surprising occurrence late one night in October 1998. MIT researchers happened to illuminate a BEC with laser light from a specific direction and of a specific polarization. It emitted highly directional beams of atoms and light.

Several months later, they realized that this baffling phenomenon, which they called a new form of superradiance, was actually a new mechanism for matter wave amplification. The researchers created the first atom amplifier the following August, in time to present results at the international BEC meeting in Spain on Sept. 13, 1999.

In the experiment described in the December 9 issue of Nature, a BEC was illuminated by three light pulses. One light pulse accelerated a few of the atoms, creating an input matter wave. A second light pulse, together with the condensate at rest, formed the atom amplifier. A final light pulse created a second matter wave, with a well-defined quantum mechanical phase, which was a copy of the input beam. The interference signal between this matter wave and the amplified atom wave proved that the input atoms had preserved their quantum-mechanical phase during the amplification process.

This interferometric technique used for the verification of the coherence of the matter wave amplification was demonstrated recently by the group of W.D. Phillips at NIST, Gaithersburg. Independently and simultaneously with the MIT work, the group of Prof. T. Kuga at the University of Tokyo realized phase-coherent matter wave amplification that also was based on the superradiance discovered at MIT. (This work is scheduled for publication in the December 17, 1999, issue of Science magazine.)

Amplified atoms march in lockstep with the input atoms, i.e. they have the same quantum-mechanical phase. This was verified by the RLE team by observing the oscillating pattern shown above which represents the interference between the amplified atoms and a reference matter wave.

Looking to the future
Coherent matter wave amplifiers may improve the performance of atom interferometers by making up for losses inside the device or by amplifying the output signal. Atom interferometers are the matter-wave analogues of optical interferometers, highly precise sensors using the interference of two laser beams, and are already used as precise gravity and rotation sensors.

While applications for the atom laser are still years away, the atom laser may someday replace conventional atomic beams where ultimate precision is required, such as in atomic clocks or in tests of the fundamental laws of physics. Atom lasers might be used for high-resolution atom deposition on surfaces for the fabrication of novel materials and nanostructures.

The amplification of atoms is a major step in creating and controlling laser-like atom beams, although MIT visiting scientist Tilman Pfau points out that the amplifier is limited by the size of the BEC, which is used up in the amplification process. The largest condensates created to date contain 10 million to a billion atoms, representing only about a millionth of a billionth of a gram of matter. Amplified atom pulses are limited to this quantity.

Ketterle says that this experiment is just the beginning. “The rapid developments in the past few years since Bose-Einstein condensates were discovered have taken everybody by surprise. We already are doing experiments that nobody would have imagined just a year or two ago. We have reason to expect further major advances in the near future.”

This work was a collaboration between research groups at MIT led by Ketterle and Pritchard. Collaborators are MIT physics graduate students Inouye, Subhadeep Gupta, Ananth P. Chikkatur, postdoctoral fellow Axel Gorlitz and visiting scientist Pfau from the University of Stuttgart in Germany.

This work was supported by the Office of Naval Research, the National Science Foundation, NASA, the U.S. Army Research Office and the Packard Foundation.