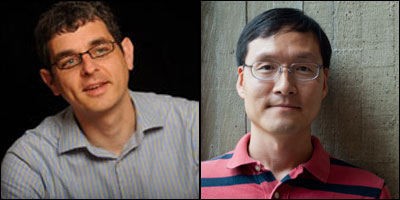 RLE is pleased to announce the promotions of Dr. Thomas Heldt and Dr. Kyung-Han Hong, effective July 1, 2012, to the position of Principal Research Scientist. Dr. Heldt is a member of Professor George Verghese’s Computational Physiology and Clinical Inference Group (CPCI), which he founded with Prof. Verghese. His work has been motivated by the growing volume of physiological data in data-rich clinical environments, such as critical-care units. The abundance of physiological data requires novel processing algorithms to convert the data into clinically actionable information. Ultimately, Dr. Heldt’s goal is to move patient monitoring from a reactive to a predictive discipline. His work has produced dynamic mathematical models, signal processing tools and parameter estimation algorithms to integrate and analyze physiological data streams. In his doctoral work, Dr. Heldt formulated and developed a model-based approach to physiological inference in order to explain a peculiar and potentially dangerous condition called orthostatic intolerance, a disorder exhibited by astronauts on return to Earth. Recently, Dr. Heldt has turned his attention to improving neuromonitoring in neuro- and neonatal critical care. With Dr. Faisal Kashif and Prof. Verghese, he has developed methods to monitor intracranial pressure and cerebral venous oxygen saturation continuously and noninvasively. Dr. Heldt completed his postdoctoral work at MIT in 2010 under the supervision of Professor Verghese. He received his Ph.D. in Medical Physics from MIT’s Division of Health Sciences and Technology, his Physics Masters from Yale University, and did his undergraduate work at Gutenberg University in Mainz, Germany.

Dr. Kyung-Han Hong works in Professor Franz Kaertner’s Optics and Quantum Electronics Group. His accomplishments span a range of topics in ultrafast laser science. His research has focused primarily on the ultrashort pulse amplification and its application to high-field physics such as high harmonic generation (HHG) and relativistic optics. He is also active in a wide range of ultrafast optics research topics such as ultrashort pulse generation and ultrashort pulse measurement techniques. One of his goals since joining the Kaertner group, in a field in which he is considered a leader, has been the realization of coherent high-flux EUV/soft X‑ray (XUV) sources using optical parametric chirped-pulse amplification (OPCPA) pumped by picosecond lasers. His work has shown that OPCPA, regarded as a breakthrough in ultrafast light-source technology, is very attractive for high power-laser applications because of its advantages over conventional laser amplification techniques. A key limitation to scaling the flux of OPCPA-based HHG sources was the availability of high quality picosecond pump lasers; in 2008 and 2010, Dr. Hong developed novel picoseconds-chirped pulse amplified lasers based on cryogenic Yb:YAG gain medium. Dr. Hong was educated at Korea Advanced Institute of Science and Technology (KAIST, South Korea), where he completed his B.A., his M.S. and Ph.D. degrees, all in Physics. After his Ph.D., in 2003, he did postdoctoral work at KAIST and at the University of Michigan under Professor Gérard Mourou. Dr. Hong had been a Senior Research Scientist at the Advanced Photonics Research Institute, Gwangju Institute of Science and Technology when he joined MIT in 2007.