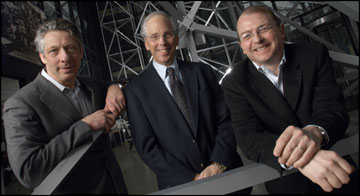 What are the ultimate powers of quantum computers, quantum communications, and quantum precision measurement systems? The new $3.5M W. M. Keck Foundation Center for Extreme Quantum Information Theory (xQIT) at the Massachusetts Institute of Technology (MIT) has been inaugurated with $1.63M in funding from the Keck Foundation, as well as funding from MIT and other sponsors, to discover answers to these fundamental, yet still unsolved, questions. Seth Lloyd, Professor of Mechanical Engineering and Jeffrey H. Shapiro, Julius A. Stratton Professor of Electrical Engineering and Director of the Research Laboratory of Electronics (RLE) will lead the new center.

The program funded by the Keck Foundation enables a major new push by MIT theorists in the international race to determine the ultimate capabilities of quantum information systems. Establishing these theoretical capabilities would move us closer to being able to exploit quantum effects for novel applications, including computers, communication networks, and global positioning systems. As technological advances drive contemporary systems and devices to ever smaller and faster scales, mastery of quantum mechanical effects is proving crucial to overcoming the current limitations of classical systems and creating the next generation of applications in which macroscopic quantum phenomena play an explicit role.

President Susan Hockfield of MIT said, “The Keck Foundation has a distinguished history of supporting bold research efforts and laying the groundwork at pivotal moments to enable breakthrough scientific progress. MIT is grateful for the Foundation’s foresight in funding this new center at a time when much Federal support is devoted to applications of quantum information science, but less to the fundamental quantum science theory needed to frame and solve some of the most important questions.”

Said MIT’s Vice President for Research Claude R. Canizares, “One of the most exciting things about the Keck Foundation’s support for the new center is that it creates a locus of interdepartmental and interdisciplinary common purpose among MIT’s researchers in quantum information theory. Our individual, world-leading efforts in quantum information science can now be integrated in a way that will improve the chances of success in the three important research areas of xQIT.”

Professor Lloyd, the program’s principal investigator, noted, “The Keck-funded center on extreme quantum information theory gives us a huge opportunity to uncover the truth about the universe at its most fundamental scales. xQIT assembles an unmatched team of scientists and engineers to attack some of the toughest problems in the field.”

The W.M. Keck Foundation was established in 1954 in Los Angeles, California by William Myron Keck, founder of The Superior Oil Company. The Foundation is one of the nation’s largest philanthropic organizations, with assets of more than $1 billion. The Foundation’s Science and Engineering Program makes awards with the objective of supporting innovative undergraduate instruction in these fields, as well as leading university research programs and interdisciplinary projects.